A certain percentage of people on earth suffer from psoriasis. First of all, psoriasis appears right on the scalp, which is recommended to be treated when the first symptoms appear. The causes of the disease have not been determined, but the symptomatology is stated. It is recommended to consult a doctor for treatment, to be treated thoroughly and to observe preventive measures. 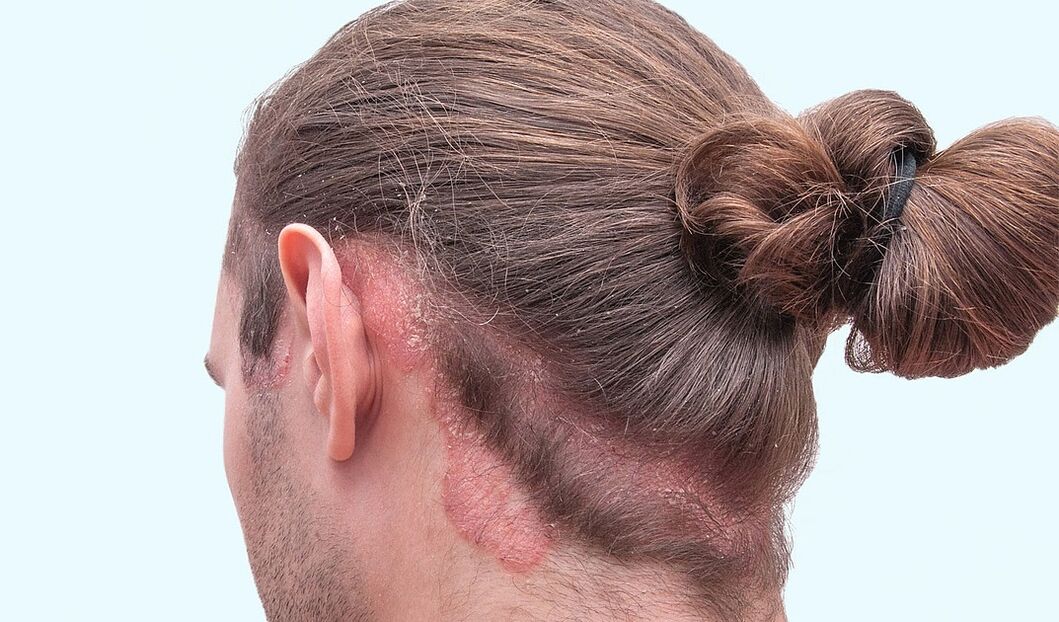 Psoriasis is a disease, the cause of which remains a mystery to humans. Many studies are being conducted on this topic, new results are emerging, new causes and theories are raising more questions. With psoriasis, the rate of new cell formation increases, as a result too many of them are formed, the skin begins to harden, and the inflammatory process begins.

So far, the following facts have been recognized as the cause of the disease - in psoriasis, the process of cell division is disrupted, the rate of formation of keratinocytes increases, which leads to the appearance of the disease.

Sometimes a violation of the immune system, which arises as a result of stress, after an infectious disease, leads to such a process. For example, among people infected with the immunodeficiency virus, the number of patients with psoriasis is three times higher than among healthy people.

A few hundred years ago it was believed that people with psoriasis were doomed and could transmit the disease to others.

Other factors that lead to the development of psoriasis:

If a person has noticed the appearance of symptoms of psoriasis, local dry skin, roughness, redness, then you should immediately contact a dermatologist for diagnosis.

Psoriasis appears on the head for some reason, for which the special structure of the skin is observed, microtraumas are often obtained when scratching the skin in this place.

According to statistics, one percent of people worldwide suffer from psoriasis, while in eight out of ten patients psoriasis is localized in the head area, in four out of ten it is localized only in the head. In six out of ten people, the disease is not limited to the scalp, but spreads to the elbows, knees, palms and other areas.

If the patient has a predisposition to psoriasis, then the symptoms may arise unexpectedly with little stress or anxiety. Allocate at -risk patient groups. Usually, symptoms of psoriasis first appear in patients between the ages of fifteen and twenty -five years.

Symptoms can vary depending on the type of psoriasis. The two main forms of the disease are mild and severe.

Dermatological diseases affect not only the physical condition of the patient, but also his psychological stability. Psoriasis, which is a chronic disease, that is, an incurable, disease, is extremely difficult to tolerate. To improve the quality of life, it is necessary to constantly eliminate the symptoms of the disease, which requires a lot of time, effort, and sometimes money.

If psoriasis on the body can be hidden with clothing, then with psoriasis on the scalp, this trick will not work. Usually, patients begin to get sick with psoriasis from this area. Sometimes psoriasis does not spread further, especially if the symptoms are always treated with good and effective medications, but the disease can spread to other parts of the body.

Scalp psoriasis is also called seborrheic. The disease is characterized by a severe crust on the scalp, which resembles dandruff. Also, patients experience itching, the formation of psoriatic plaques in this area.

An important fact for psoriasis patients is that the hair on the scalp does not fall out either at the onset of the disease or during its development.

The skin under psoriatic plaques can bleed when scratching, so patients should not scratch their skin. The affected area may be red due to the inflammatory process.

The disease periodically progresses and regresses. With relapse, the symptoms of the disease return, in which case the patient should use medication to eliminate the symptoms so that the remission period begins. In remission, symptoms of psoriasis were not expressed.

The duration of each period depends on many factors. The remission period can be up to two years.

To find out what psoriasis looks like on the scalp, let’s move on to the symptom photo section.

So far, no one has been able to find a cure for psoriasis.

There are many medications available to treat the symptoms of psoriasis. As a result of the use of medicines and folk remedies, complex therapy, the quality of life of patients improves.

First of all, you need to contact a dermatologist for a diagnosis of the disease. The doctor will conduct all the research and analysis necessary to establish an accurate diagnosis.

Restoration of the people

For the treatment of psoriasis on the scalp, folk recipes are used. They are recommended for use as part of a complex therapy to enhance the effects of drugs.

It is forbidden to use traditional medicine recipes freely. They should be discussed with your healthcare professional and should be used only after approval.

The following medications are often used to treat psoriasis on the scalp:

Medications for the treatment of each patient are selected in the presence of the attending physician, according to test results, stage of the disease, level of immunity. He will tell you how to treat psoriasis on the scalp.

Not always a medication prescribed by a dermatologist, even an experienced one, can be right for a patient. Many products have no effect at the beginning of use. It is recommended to take the drug in complex therapy, that is, to combine several forms of medication.

There are several groups of medications for psoriasis and various treatments.

Hormonal agents contain in their composition of active components - hormones, which have a very effective effect on the body and quickly relieve symptoms, but it is not recommended to use them for a long time.

Steroids can be systemic, they are taken orally in tablet form, or they are given intravenously / intramuscularly. Ointments with hormones in the composition are less effective. But they should not be used for a long time, because the skin at the site of application of the product can change the pigment, it becomes thin, traumatic, prone to secondary infections.

In addition, after the use of hormone medications, withdrawal symptoms are often observed. This is when, after prolonged treatment and cessation of drug use, symptoms return, but with greater symptoms.

Therefore, it is not recommended to use hormonal preparations for a long time, to apply on areas with sensitive skin, to apply on large areas of skin, as well as to cancel the use of the drug, it is necessary to reduce the dose gradually.

Non -hormonal medications are also commonly used to treat psoriasis. They are used to relieve symptoms, inflammation, itching, redness of the skin. They have a much smaller list of contraindications and side effects.

The main active ingredient of this group of drugs relieves inflammation, narrows blood vessels, soothes the skin, moisturizes and softens it. Of the active components, zinc, tar, salicylic acid and other substances are observed.

They can be used at any stage of the disease. In addition, such drugs have many different forms of release. They also differ in effectiveness and recommendations for use, reviews of its effects in the treatment of psoriasis on the scalp can be learned on the forums.

Zinc can be used as often as needed, but tar -based products are not recommended more than twice a week. In addition, it should be used in conjunction with moisturizers because tar dries out the skin.

Cosmetics are also very popular among patients because they improve the appearance of the scalp, but at the same time do not have any therapeutic effect.

Instead of cosmetic products, consumers choose oils and shampoos that moisturize the skin, eliminate itching and dandruff on the scalp with psoriasis.

For the treatment of psoriasis, drugs are used that suppress the immune system, metabolism, stop the process of renewal and division of skin cells.

These funds can be taken only under the supervision of a doctor, because they have a large list of contraindications and side effects.

It is also necessary to improve the general condition of the patient by following a special diet that excludes foods with allergens from the patient’s diet. It is recommended to take vitamin and mineral complexes.

Physiotherapy can be prescribed to patients. For example, ultraviolet irradiation is indicated for "winter" psoriasis.

For preventative purposes, the following recommendations should be adhered to:

Many people question whether scalp psoriasis is contagious. The answer is no, the disease is not contagious.